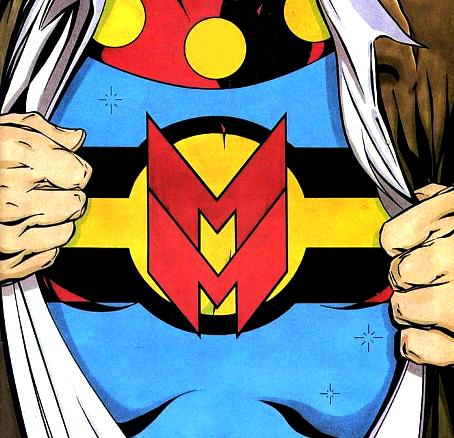 One of his early comics was called Marvelman

Let me tell you a story:

This guy is just going about his job. He has weird dreams, whatever, he’s an ordinary guy.

One day he goes to work, he happens to be a reporter, and is at a nuclear power station when some terrorists (they’re everywhere!) attack.

He gets put into deadly danger, and suddenly there’s a flash of lightning: bam! He turns in MARVELMAN! One terrorist gets his faced burned off just watching it happen.

Marvelman flies around. He has memories from his regular life, but also from his life as Marvelman, this ridiculous Silver Age of comics style super-hero, basically just a rip-off of Shazam!

So in comic, he is just this dude, living in the real world with no superheroes, who suddenly has superpowers, and a memory of a life full of 1960’s comic nonsense.

He flies home to his wife, and from what I can remember, immediately has sex with her. She is suitably impressed by his superhuman form. Later he turns back into regular guy.

Ah, so now we get to what reminded me of Miracleman (the name confusion is a result of copyright issues): the “Miracleman” state is just a much better state than the dude’s regular life. He starts to develop a complex. My wife loves the superhuman version of me more, the superhuman version is better at everything, it’s a lot smarter, etc. Of course it’s him, he has the same memories and all either way, it’s just a different version of him is having access to those memories.

Sort of like, y’know, taking acid. You’re still you, just inhabiting reality differently. And then imagine how much bigger of a deal it would be if not only were your perceptions different, but you were actually physically different in the two states. When you’re in one state, you can almost think about the version of you that will be / has been in the other has something separate or other.

Anyway, ultimately the guy ‘commits suicide’ by changing into Miracleman one last time and leaving a note to Miracleman to not change back, thanks.

Quite a bummer really.

A crazy amount of additional super-crazy shit happens in Miracleman: but the conclusion to the main plot is below, so if you plan to read it (AND BY GOD, I RECOMMEND YOU DO!) and haven’t yet maybe don’t read on.

Okay my conscience is clear.

So Miracleman finds out that some alien crashed on Earth. Scientists reverse engineered its spaceship and figured out a way to make these doubles of people that would have superpowers, that they could then switch in and out of hyperspace. So at any one time either Miracleman, or regularman are in this weird other dimension, in storage, and the other is out doing stuff. The scientists (British government scientists) for some godforsaken reason decide that the way to control these superhumans is to keep them in this trippy dream state most of the time, just dreaming their lives away in shared comic book hallucinations with their superhuman buddies.

Then when they’re needed for something they maneuver the dreamers into position within the dream, wake them up and deploy into the real world, they go do something, and then fly back and go back into the dream.

It’s over-elaborate, but necessary I guess because each superhuman they create has the power of god. Think Silver Age Superman type shit. So if they just let them do what they want, they would be the kings of the Earth. You’d just have to hope that the superhumans were nice to everybody else, because normal humans would live on sufferance. On the other hand control them, and that power is at your fingertips.

Ultimately they just get too freaked out by the whole thing, the government trashes the program, tries to blow them up with a nuke, a surviving superhuman washes up in normal form and lives a life. And then he remembers all this Miracleman stuff, setting the plot in motion to reveal the above.

The superhumans do indeed become kings of the Earth, and luckily they are indeed pretty nice.

I think Miracleman may be my favorite Alan Moore comic, over much better known ones like V for Vendetta or Watchmen. It may be a little less slick and coherent, but it makes up for it with balls to the walls acid trip insanity. It’s somewhat hard to get these days because copyright issues have made it difficult to publish, and also shut it down in the middle of the next big story arc, written by Neil Gaiman taking over from Alan Moore. So basically I’m saying go pirate it and read it right now.

This entry was posted on Saturday, February 14th, 2015 at 2:15 pm and tagged with Entertainment, Trip Report and posted in Uncategorized. You can follow any responses to this entry through the RSS 2.0 feed.
« Writing While Tripping
Watching Alien on Acid »

One response to “Miracleman!”